With the brand new Discoverer Rugged Trek, Cooper has brought to market a tire that has the style pickup truck and SUV drivers want, while retaining the civilized performance they demand.

In short, the Discoverer Rugged Trek looks like an amazing off-road tire, but performs like a quality all-season. And that’s quite an achievement.

On-road handling is optimized thanks to Cooper’s Stable Trac Technology, where the inside tread blocks feature siping running in multiple directions to give added grip, particularly in the wet. The deep void space between each tread lug also helps prevent hydroplaning, while more sipes on the external tread blocks act to give even more wet-weather grip.

Shoulder tread blocks feature tie bars or “stone blockades” that serve numerous purposes, forcing out rocks from sticking into the tread off-road (thus prolonging tread life) while on-road they connect the blocks for added stability in cornering, while also allowing for longer tread life by flexing less under acceleration and braking.

Visible on the sides of the internal tread blocks are edges that Cooper calls “Whisper Grooves.” These work to cut the noise from air flowing through the tire – common with aggressive tread patterns like this. Owners reporting genuinely surprised at how quiet this aggressive-looking tire really is.

The tire isn’t entirely on-road focused, however. The large tread lugs and significant void spaces naturally give plenty of off-road grip, while the “Earth Diggers” the run along the shoulder of the tire help give further grip in loose surfaces, while also providing an added layer of protection to the sidewall.

Ribs that run between the external tread blocks also work as stone ejectors to prevent rocks from getting caught in the tread pattern, which can limit grip, create uneven wear and reduce tread life.

All this goes to say that Cooper did still build this tire to handle some real off-roading, and like any Discoverer tire, it impresses.

And as mentioned above, the Discoverer Rugged Trek looks the part of a true off-road tire, not only on the tread surface but on that sidewall where owners have the choice of sidewall design. There’s a conventional “Knife-Edge” look or the more aggressive “Mountain Pass” design, which we particularly love! 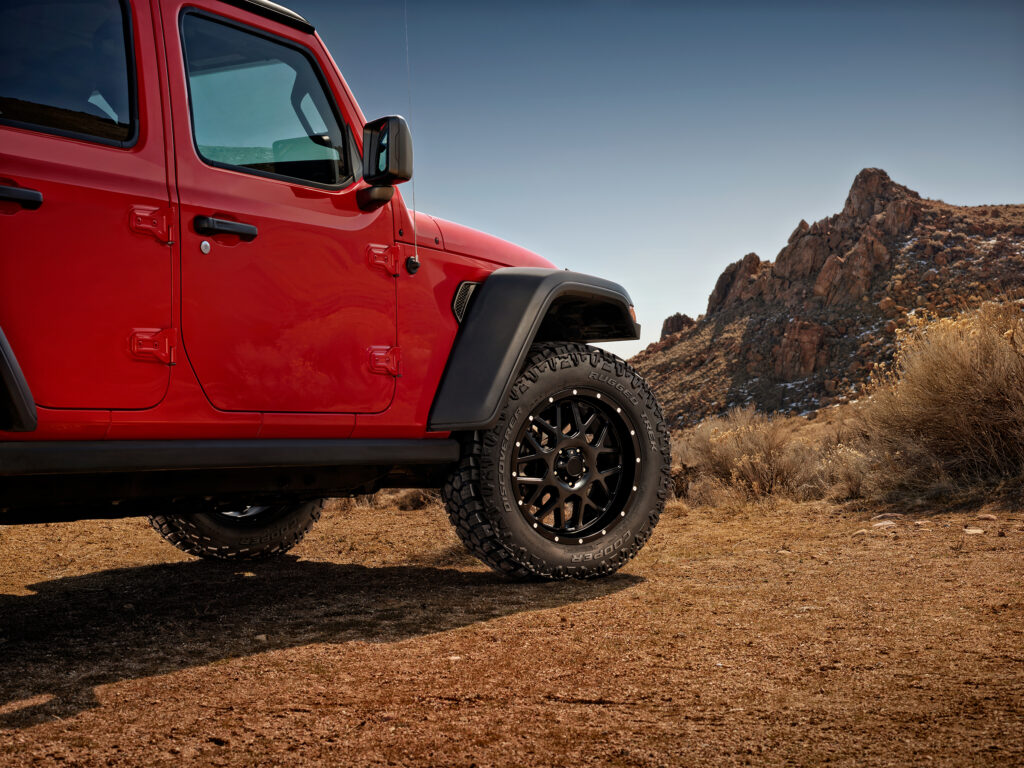 Built for those who want off-road style with on-road comfort, it seems highly likely that these tires will be a hit with the aftermarket crowd who don’t intend to hit the trails. As a result, it’s nice to see that Cooper offers some lower-profile options. (We are disappointed in the limited selection overall, but we expect more sizes to be added soon).

As for pricing, it’s hard to judge these tires as they are unique. As far as all-season tires go, they are on the expensive side. And yet, if you compare them to mud-terrain tires (which is what they look like) they’re a considerable bargain. And they’ve even better when you consider they’ll probably last twice as long as a set of MT tires.

Pricing for the Cooper Discoverer Rugged Trek ranges from around $180 per tire for a 16-inch fitment and goes up to just around $300 for a 22-inch fitment.

Cooper’s standard limited warranty covers defects in materials and workmanship with a free replacement for any defects found on a tire during the first year of ownership. After that point, and down to the final 2/32-inch of tread life, Cooper will replace defective tires on a pro-rated basis.

How Many Ply is the Cooper Discoverer Rugged Trek?

In terms of the sidewall, the Rugged Trek makes use of a conventional 2-ply setup, rather than the 3-ply you’ll find common on Mud Terrain tires.

Is the Cooper Discoverer Rugged Trek Good in Snow?

Despite its siping and overall aggressive look, the Rugged Trek is no more capable in snow than a conventional all-season tire.