From the off-road experts at Cooper Tire, the Discoverer AT3 4S is part of an expanded A/T3.

Lunched alongside the new AT3 LT (designed for HD trucks), and the AT3 XLT (build for more extreme off-roading) the 4S, as the name suggest, brings with it one important highlight: the ability to deliver impressive traction in four seasons – and we do mean snow.

Serrated edges on the treadblocks are a part of what Cooper calls its Snow Groove Technology. According to Cooper the patented “saw-tooth” design traps snow to deliver maximum traction on snowy surfaces.

Designed for all-terrains and weather conditions, the Discoverer AT3 4S can handle more than just snow, which is why the tread also includes AquaVac channels, which run between the treadblocks to help spit out water and prevent aquaplaning.

Additional tread features include the uniquely shaped 5 rows of treadblocks, which are designed to deliver grip on-road and off-road. And finally, yet another feature exclusive to the AT3 4S are new micro zigzag-pattern sipes in each tread block, another telltale sign of winter performance and grip. 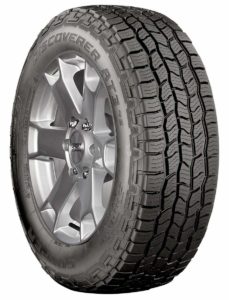 All of these features combine to give the AT3 4S the official rating as a winter capable tire: the three-peak mountain snowflake symbol which can be spotted on the sidewalls.

A more than capable all-terrain tire and one that Cooper rates above the standard A/T3, the 4S does sacrifice some quietness and handling to deliver the specific package that it does. If you’re looking for even more off-road capability, Cooper has more aggressive tires available like the Evolution MT.

We regularly rave about the BFGoodrich All Terrain TA KO2 all-terrain tire and while that is fantastic for maximum capability, the Discoverer AT3 4S performs at a very high level with much better on-road grip, lower noise and longer tread life.

Amazingly, despite the tire’s off-road performance it still manages to have a high UTQG tread life rating of 620, which is why it lasts as long as it does.

What Vehicles Will The Cooper Discoverer AT3 4S Fit On?

While retailers offer different prices depending on where you look, the Cooper Tire Discoverer AT3 4S retails for approximately $111 to start. You can also find the latest deals on Cooper Tires here.

The Cooper Tire Discoverer AT3 4S comes equipped with a standard limited warranty and an impressive 65,000 mile limited treadwear warranty on euro-metric sizes. That warranty is extremely impressive. It also comes with a free 45-day road test.

Are Cooper AT3 Tires Any Good?

In short, yes, absolutely. Cooper might not be as well known as Michelin or Continental, but they’ve grown to become a tier-one manufacturer, with impressive R&D, and the tires that result from that.

As a brand Cooper is perhaps best known for its truck and SUV tires – all as a result of its Discoverer sub-brand. And in particular, the AT3.

Originally, Cooper made just one AT3 tire. It was extremely well received by critics and consumers alike. As a result, the brand decided to roll out specific versions for more niche truck audiences, with the AT3 4S for year-round performance in colder climates (something Cooper knows about, being based in Ohio), while the AT3 LT is made for trucks and designed for carrying loads, while the AT3 XLT edges closer to being a mud-terrain tire with added grip and sizes specific to lifted pickups (like the Ford Raptor) and Jeeps.

Overall, Cooper consistently performs right at the top amongst its peers, and does so as a slightly lower price point.

What Ply Are Cooper Discoverer AT3 4S

The Discoverer AT3 4S has an internal structure made up of two high-strength steel belts with a single-ply nylon layer, wrapped in a two-ply polyester casing. This helps to deliver stability at highway speeds as well as overall durability and tire life. The sidewalls on the tire are a two-ply construction.

Are Cooper Discoverer AT3 tires noisy?

Among all-terrain tires these are impressively quiet, despite the heavy siping that gives this tire it’s year-round grip. Computer designed tread blocks have been fine-tuned to minimize noise levels created by the tire on the road and against the air too.

Cooper Discoverer AT3 vs AT3 4S

Tire companies don’t make picking tires easy. Thankfully you don’t need to worry about choosing between the Cooper Discoverer AT3 and the new AT3 4S; that’s because the former has been discontinued. Cooper’s AT3 tire has been a massive success for the brand and so it expanded that tire into its own lineup a few years back with the AT3 4S, the AT3 LT (for heavy-duty pickups) and the AT3 XLT designed for use on lifted trucks and extreme off-road use. The AT3 4S is the next-generation AT3 tire and features everything from a new tread compound to numerous upgraded features.

Offering high-levels of off-road grip, the 4S improves on the old AT2 with added serrated edges on the tread blocks for more biting edges. The sidewall design is a little less aggressive, though no less effective, and helps improve road noise. The two most significant improvements are a 10,000 mile longer tread life, with a 65,000 mile warranty, while at the same time (as the name suggests) the 4S is designed for four seasons and comes certified with the three-peak mountain snowflake logo for extreme winer driving.