The Michelin Premiere LTX is a rare tire for the brand in that it utilizes a new technology. It’s also rare because unlike almost every other Michelin tire, it is not terribly well rated.

Michelin made some big claims with its new Premiere LTX tire designed for SUVs and crossovers and while the technology does live up to the hype, this tire also comes with some drawbacks.

The biggest news about the Premiere LTX is that is features Michelin’s new EverGrip technology, designed for improved wet weather braking over the life of the tire.

When tires are tested for performance, they are usually tested when brand new. And Michelins usually rate at the top of the pack for their intended performance, be it grip, ride quality, or long life. This new tire was designed with wet weather braking in mind, and not just when new, but when the tire has reached its half-life.

To break this new technology down, while the rubber itself becomes less ideal over time, the physical design of the tire changes to compensate for that. The outside treadblocks feature grooves that emerge, while the circumferential lines that run the length of the tire actually get wider with age – to prevent hydroplaning. 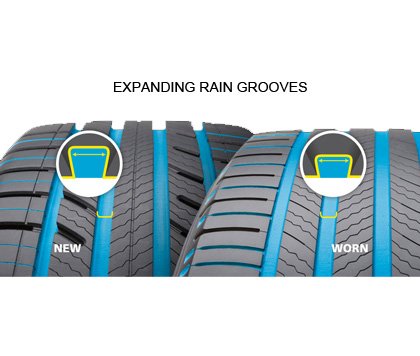 In testing done by Michelin the tires (when half-worn) stopped shorter in wet weather compared to the Continental LX20 and Goodyear CS TripleTred.

An amazing idea, in theory, it appears the tire seems to wear too quickly as a result and even Michelin’s own website features a long list of negative reviews The brand has not said if they intend to perfect this technology ( we assume they will). Regardless, these tires come with a 60,000 mile limited treadwear warranty, so anyone with a complaint is likely getting a new set of tires.

There are some benefits to buying top-tier tires.

Another tire to consider for premium crossover and SUVs is the Michelin Latitude Tour HP.

Pricing for the Michelin Premiere LTX starts at around $148 and goes up to about $250 per tire. Michelin isn’t big on discount either, so if you’re looking for a bargain, it’s best to shop around during major sales holidays.

With plenty of reported issues about tire life, it’s at least nice that the Michelin Premiere LTX is backed by a 60,000 mile limited treadwear warranty. Like all Michelin tires it’s also covered by the brands standard manufacturer limited warranty that covered defects and workmanship for the life of the tread, or six years from the purchase date, whichever comes first.

What Vehicles does the Michelin Premiere LTX Fit On?

Similar tires in certain respects, the main stand-out feature of the Premier LTX is its Expanding Rain Grooves and Emerging Grooves. These two features open up more space in the tire to deliver more physical void space for evacuating water as the tire wears. This helps counterbalance the reduced tread grip as the tire wears so the Premier LTX maintains its wet weather performance over the lift of the tire. That said, it’s a superior wet weather tire.

The Defender LTX, however, doesn’t feature these unique traits. It does come with a 70,000 tread life guarantee, compared to just 60,000 miles for the Premier LTX. So if longer overall tread life is your priority, the Defender LTX is a better choice. That, and Michelin promises superior cold weather grip for the Defender series.

How Long Does the Michelin Premier LTX Last?

While the Premier LTX is rated to last up to 60,000 miles according to Michelin, based on the bulk of online user reviews and independent testing, you should expect closer to 45,000 miles.