Best All Weather Tires for SUV

All-weather tires are not all-season tires – they’re better! Though they haven’t always been.

The big annoyance with all-season tires is that if you live somewhere that gets a season known as “winter” then they they aren’t terribly useful. In fact, often they’re useless.

All-weather tires, however, deliver on the promise of true capability in each of the four seasons and can be identified because, like proper winter tires, they wear the three peak mountain snowflake logo on their sidewall. As a result, they have been tested and certified to reach the minimum threshold for true winter performance.

All-weather tires have been rapidly growing in popularity as of late. The demand has always been there but the tire technology just never really supported it.

We should also point out that some brands, like Dutch tire manufacturer Vredestein, have long been making all-weather tires, though earlier versions weren’t terribly good (we were pretty disappointed in hands-on testing we’ve done), with mediocre summer performance and disappointing winter grip. All that has now changed. 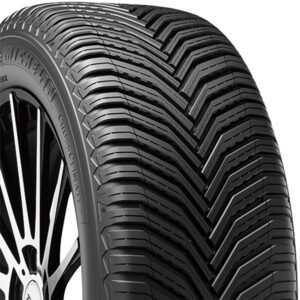 One of the newest offerings in this emerging segment, Michelin gets top marks, as usual.

This tire looks like almost nothing else on the road (except perhaps the Hankooks below) due to its unique v-shaped tread pattern. Rather than a conventional five-row setup of circumferential tread blocks, this v-shaped design has several unique advantages.

For starters, in the wet it’s able to easily force water away from the contact patch. That same functionality is retained in slush too!

When the snow flies, these tires are able to grip surprisingly well as the small divisions inside each long tread block trap the snow against the tire, so it can use it as a friction point against the snow on the road. (This is the same principle winter tires use).

Finally, when it comes to summer performance, the extra long tread blocks provide grip and predictable handling. Plus, those divisions on the tread blocks lock together under harder acceleration, braking or cornering to give a stable surface on the road.

There are two drawbacks worth noting. The first is tread life, which at 60,000 miles is around 10,000 miles less than you’ll get on a conventional set of premium all-seasons. The second is price, which is certainly more than all-seasons as well. However, the advantage of never having to think about swapping tires or storing tires is huge! 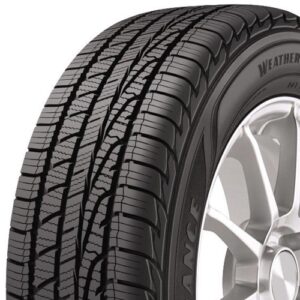 If tires can be smart, this one most certainly is. A close second to the Michelins above the Goodyear Assurance WeatherReady has been on the market for a few years and is arguably the reason every other brand is pushing into the all-wether space.

With a more conventional design it makes use of several unique features, not least of which is a plentiful amount of sipes on the tread surface giving this tire it’s three-peak mountain snowflake certification.

Of note, the center tread section features grooves that lock together under harder acceleration, braking or cornering to provide a more stable tread surface.

Most importantly are the Evolving Traction Grooves. Essentially the circumferential channels in the tire that are used to evacuate deeper water actually widen up as the tread wears down. As a result, this tire is able to maintain its water-dispersing capabilities even when used – maintaining all-weather traction over the life of the tire.

Similar to competitors in this space, tread life is around 60,000 miles. The biggest down side is that the Goodyears are generally the most expensive option. 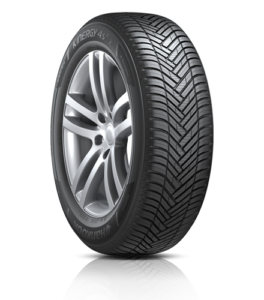 Looking very similar to the Michelins on this list, the Hankook Kinergy 4S2 X is also quite new to the segment. It utilizes similar innovations as the Michelins, though if you look closely the v-shaped tread pattern actually isn’t as wide, allowing for more conventional water evacuation channels running the length of the tire. Water and slush does still get forced out diagonally.

Siping on the tread blocks works impressively well and we were overall incredibly impressed with grip in both light and heavy snow. We didn’t expect as much from this tire, but it’s a clear indication of just how far all-weather technology has come that a more budge-focused option can deliver true winter grip. The three-peak mountain snowflake logo is definitely something this tire has earned.

Of note, this tire is designed with a more robust structure for crossovers and SUVs. It is also available (without the X) for sedans. 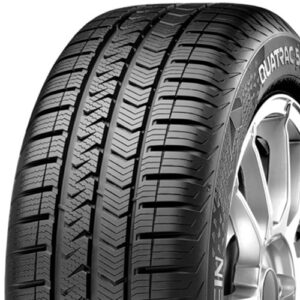 The tire that stated it all, Vredestine has been making four-season or all-weather tires for decades, which have been far more popular in Europe – but have only just now caught on in North America.

We tested some of Vredestien’s previous models 15 years ago and came away disappointed. However, the technology has evolved and these are quite capable.

Winter grip isn’t quite as high as the other tires on this list and siping is lower too, with a focus on having the innermost tread blocks featuring more zig-zag grooves while the outside blocks are more conventional. Wet weather grip is quite good.

This tire relies on a softer tread compound for added winter grip and as a result wears faster than other tires on this list, with just a 45,000 mile warranty.

Being experts in the all-weather segment, it’s not surprising that Vredestein offers more than one option for those in search of true year-round performance. What makes the Quatrac Pro stand out is its heightened focus on performance.

While the Quatrac 5 is designed for more conventional vehicles, the Pro is build for premium and performance models. the Quatrac 5 uses just four tread rows and as a result gives up some nimbleness and outright grip. The five row tread setup offers better responsiveness.

PROS & CONS of All Weather Tires