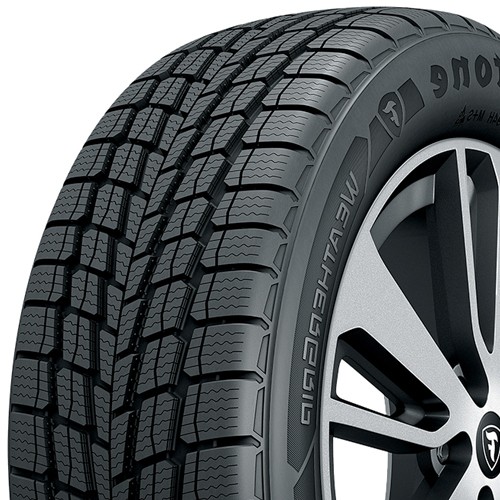 Winter-certified four-season or all-weather tires are rapidly growing in popularity, but almost all have something the Firestone WeatherGrip does not: an expensive price.

To clarify, this tire is not a conventional all-season tire. All-season tires have always been poorly named because if you live anywhere that actually gets a real winter, they just don’t cut it when the mercury dips and the snow begins to fly. Instead this tire does what an all-season tire can do, but also serves as a winter-capable tire. It even comes certified with the three-peak mountain snowflake logo on its sidewall.

We should clarify that this doesn’t mean it’s a true winter tire, but rather that it meets a basic minimum of winter performance.

Firestone recommends it for those who live in climates with all four seasons but where dedicated winter tires aren’t necessary.

To achieve this rating the tire offers winter grip in two ways. First, it’s unique tread compound resists freezing so it can retain grip on colder roads. Second, you’ll notice the heavy amounts of zig-zag sipes on the treads. These grip snow in the winter, causing the snow to stick to the tire, which it then uses as a way to generate friction with snow on the ground. These sipes are also full depth, meaning they’ll continue to offer excellent winter traction as long as the tire has tread.

The tread design also helps deliver traction with a directional pattern that helps give grip under both acceleration and braking.

At the same time, the tire needs to also offer quality functionality in other seasons, particularly in the wet. This it does thanks to large circumferential grooves that easily evacuate water and prevent hydroplaning, while open shoulder slots also force water out laterally.

When it comes to summer performance and driving dynamics, this is where there’s some drop-off compared to a conventional all-season. Wider external tread blocks are designed to minimize the impact of this, but the large divisions in the tread for snow grip still impact handling capability and introduce more flex into the tread surface. As a result turn-in response, cornering capability and outright grip aren’t quite to the level of most all-seasons.

Overall tread life is only minimally impacted, however, and a 65,000 mile warranty is quite good.

Depending on what you’re looking for, this can be a reasonable trade-off.

Is the Firestone WeatherGrip Any Good?

Overall, this tire makes some compromises in terms of summer performance and (minimally) noise level to deliver an all-season package that’s actually good in all seasons, comes with a solid tread life and is attractively priced too!

Firestone backs the WeatherGrip tire with a 65,000 mile tread life warranty. In addition, a standard limited warranty covers defects in materials and workmanship for the first five years. Within the first three years, Firestone will replace defective tires free of charge. After that point and until the final 2/32-inch of tread life (and within the first five years), Firestone will replace defective tires on a pro-rated basis.

Plus, it comes with a 90 day Try and Buy guarantee, so if you’re not completely satisfied within those first three months, you can return your tires for an exchange or full refund.

Overall tire life will change significantly depending on how you operate your vehicle, however, you should get up to 65,000 miles on a set of Firestone WeatherGrip tires. This assumes you follow proper tire rotation procedures and keep your tires properly inflated.

With heavy siping and plenty more edges for winter traction, there is some compromise in terms of tire volume with the Firestone WeatherGrip.